You Can’t Mumble Your Way Through Shakespeare: An Interview with Acting Coach Howard Fine 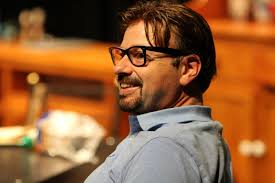 My introduction to Howard Fine was in the form of a tweet that underscored our shared mission and, suffice to say, made my day.

Howard Fine is the master acting coach behind the Howard Fine Acting Studio (Los Angeles and Melbourne Australia), author of “Fine on Acting,” former head of the acting department at the American Musical & Dramatic Academy, and one of the most sought-after and well-known acting teachers alive today. Howard has worked with actors including Brad Pitt, Will Smith, Justin Timberlake and Salma Hayek.

I had the honor of chatting with Howard and could have talked with him until the proverbial curtain went down and the vaudeville hook pulled me off the stage.  Here is our conversation…

AMC: Hi Howard!  Although you probably don’t recall our first tweet, I saved it and hung it above my desk.  You said, “@MannCronin It is my personal mission to rid the world of “LIKE.” Your app is genius!” (blush)

Since then, I know that we are singing from the same songbook and I am thrilled to speak with you today about acting and communications and where the two meet up.

You talk a lot about focus and the importance of reading. You said, “How will an actor handle the classics if they can’t handle language?”  What techniques do you use to teach actors to find their focus and be mindful of their words? 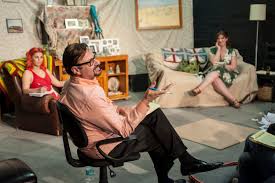 HF:  We start with stillness.  As an actor, you have to have concentration, and develop the skills of concentration. You have to be in the experience. It is a muscle that has to be worked.

There is an epidemic today of ADD and ADHD. You know those Fidget Spinners that are so popular? They are a way of leaving the present moment. Nowadays, people are used to and want to have, tons of stimulation.  I tell my actors, if they can make themselves still, then what they do will be by choice rather than by habit.

AMC: You told me that in your Foundation Class, whenever anyone uses the word “like” the entire class shouts it back at them and that they have to pay a dollar fine!

HF:  The “L” word!  I give them a challenge on day one.  I tell them, at the end of the year, we will have a pizza party and either I will pay for it, or you will.  In the last five years, I haven’t contributed a cent. Now it has gotten so bad, the party even includes appetizers, drinks, fruit…

AMC: I think about what Eleanor Roosevelt and William Shakespeare would think if they heard how we speak today. They would be shocked, demoralized.

HF: Mortified!  Imagine if we inserted “like” into the great speeches of history.  Martin Luther King Jr.’s, “I have, ‘like,’ a dream”  We have to make it uncool to use that word and show them that it sounds foolish.

AMC: Can you tell me why you are so stringent?

HF: I am so stringent because actors are storytellers.  If you cannot be a storyteller in your life, the art of conversation is being lost.

AMC:  How about for auditions? Does it really matter if you are an articulate, confident speaker?  Does the lack of these skills undermine an audition?

HF: Yes, it does undermine you, because the actual audition is just part of it.  Do you have something to say?   Do you have a conversation to make?  If you are not articulate, how will someone trust you to speak real dialogue?  The History Boys came out at the National Theatre in London and it is all poetry and history. I wonder how many of my students have the verbal facility.  I can tell in a very short time if someone can handle language.  If they are mumbling. You can’t mumble your way through Shakespeare.

AMC:  In our digital culture, communication is being upended by technology. I am a big advocate for technology that humanizes our life experience, but it seems the art of mindful, face-to-face, substantive conversation is being compromised when our heads are down and we are texting instead of talking.  Do you experience this with your actors?  Do you allow smartphones in your classes?

HF:   I do experience it with my actors.  Phones are only allowed in class to record an assignment or a critique, but they must be in airplane mode. If someone’s phone rings in class they are asked to leave for the day. It is the same for everyone.  I find that if I have a strong structure and the rules are the same for everyone, people are more relaxed.

AMC: I like to say that I want to turn our smartphone addiction into a solution; to give both the instructor and the student tools that help practice for, and bring awareness to, our communication skills.   Would you use an app like LikeSo to help actors prepare for readings, scenes, improvisations?

HF: Yes.  The ability to communicate is the number one skill. Your app, LikeSo, which diagnoses issues like filler words and pace is akin to taking the work we do in class outside of class. If they are just working on their speech in my class, it is not going to change.  They need to practice 24/7.

This year, a student came into my office upset about how many “like” fines he had received. He said, “Ya know, like, I don’t think that I, like, use the like word so much.”  I said, “You just used it 10 times!” He didn’t even know!

Here’s a happy story. I had a student who used “like” every other word.  She was a bright person but sounded unintelligible. When I pointed it out, she left my class in tears.  But she came back and wasn’t using “like” anymore.  Then she rose to the top of the class. When she went for her first acting audition, she got the role.  She said that when she realized she could improve her speech, she knew she could do anything.  It was empowering.

HF:  Yes. Communication is central to everything.  But as a teacher, our educational system has failed me. People are coming to study acting after graduating college or high school. They are not literate and they are not articulate.  These skills of focus, concentration, reading comprehension have not been addressed. How can I teach these remedial skills of basic speech work?

AMC: Do you have advice on what an actor can do to improve their communications and technique?

I tell my students to read the news. Actors need to have the intellectual capacity. I have never successfully taught an unintelligent person.  Some people think, “I was never very good at school. I was never very disciplined.  Oh, I’ll act!”  But, acting will call on every skill you ever developed.  To read a script and understand it and interpret the words takes skill, intelligence, and discipline.

Nnamdi Asomugha, was a famous NFL football player for the Oakland Raiders.  But that is not his only talent.  Nnamdi is bright, well read, intellectually curious and worldly. He came to study with me for three years before he became an actor.  Nnamdi worked on Othello in my class and when Will Smith heard him read, he was so impressed, he wanted to come back to class.  Nnamdi has the best qualities of an athlete — persistence, patience, endurance, discipline, and the willingness to handle repetition. And he is used to a tough coach. He is not shocked by criticism. When Nnamdi went to audition for Crown Heights, which won Sundance, he got the lead.

AMC: That is inspiring and underscores the importance of focusing on the hard work; on the craft of acting. And, I believe he is married to Kerry Washington?

AMC: Lastly, when it comes to being artful in our communication, what actors are exemplary at focus and communication?

HF:  Meryl Streep, Kevin Spacey, Judi Dench, Cate Blanchett. Look at how they speak. That’s why producers can imagine them in great roles.  It’s not simply what comes out of their mouth.  It’s how they carry themselves.  Their breadth of knowledge. Their insight of the human condition.  Meryl Streep said, “Empathy is the most important quality an actor can have.”