Like, Can I Check Your Reservation? How My Dad & an App Got Me to Stop Talking in Similes! 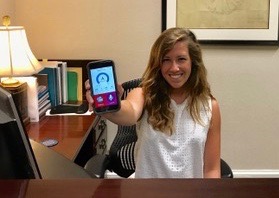 This is a phrase (and often an exclamation!) I have come to know all too well throughout my life. It originates from none other than my own father, and one he wishes he didn’t feel compelled to exclaim so frequently. No, he is not really telling me to stop using that poetic figure of speech you learned about in 5th grade English class. He is telling me to stop abusing the one word that has become the bane of his existence, otherwise known as, “like.”

If you spoke this sentence in a normal conversation, you probably wouldn’t think twice about it. But it looks pretty silly in writing, doesn’t it? The use of filler words such as “like,” “literally” and “you know” has become so pervasive, particularly among millennials, that it is taking away from our power and confidence in speech. At multiple points during our younger years, my father would go so far as to set a rule that each of my sisters and I would have to pay a quarter for each time we said “like” around him. Imagine our embarrassment when he even began calling our friends out on “like,” too.

As much as I may have rolled my eyes at Dad’s “like” chagrin growing up, I look back now and am truly mind blown at how fortunate I am to have had someone instill this speech awareness in me from a young age.

I work in the hospitality industry, at a bed and breakfast, in a position that involves lots of communication and service to guests both in-person and on the phone. It has become my goal to eliminate filler words from my speech in order to exude confidence and make meaningful connections through clear and effective communication. When I first started working here, I was given a list of proper terms to use when in a position of service, such as saying “my pleasure” instead of “no problem,” or “I’ll find out for you” instead of “I don’t know.” The nuances in these minor changes in speech make a world of difference in the manner you are perceived by those you are serving, and speaking confidently, articulately, and without distracting filler words goes right along with this.

That’s where a speech app called LikeSo comes in.

You can imagine my father’s delight when I told him of a smartphone app whose mission is to empower people to be better, more confident speakers, by eliminating fillers and acting as a personal speech coach. LikeSo has become instrumental in my daily life by bringing awareness to not only my usage of “like,” but 13 other filler words that cause speech disfluency as well as the speed and pace of my speech. While LikeSo is perfect for preparing for formal interviews or presentations, I have found just as much value in its influence on my day-to-day communication and confidence.

Now, anytime I catch myself “talking in similes,” I know LikeSo, and my dad will be there to help me reach my goals.