Gabby Marino Speaks Out About Feminism
Posted by Sayit on March 8, 2017 | Featured | 1 Comment

When my parents decided to name me Gabby, it was more of a premonition than a name. I don’t hide the fact that I am a bit of a talker. I am not a wallflower nor do I wish to be. I have a chatty charm, a mouthy rant, a loquacious loudness and a gabby soul. But I have only recently discovered the power behind my words. There is a difference between speaking and being heard. Thankfully, I found my voice at a critical time.

This election cycle has brought forth hot topic issues that have left us all with divisive opinions. But what good are your opinions if you don’t know how to articulate or defend them? Some people have a gift for gab. They make public speaking look easy. But behind every groundbreaking speech or compelling interview is hours of practice and preparation. It turns out your mom, piano teacher and soccer coaches were right – practice does make progress. You need to not only know your stance on the issues, but be able to defend them articulately and with gusto. 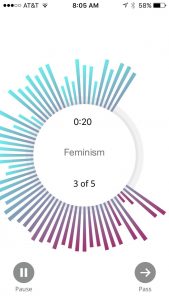 The issue that I feel the most passionate about is feminism. Many people are fervently for or against this issue. Yet few people really know what it means. It took me three years to figure out what the word “feminism” meant to me, and how to articulate my convictions.

For some people, feminism is a four-letter word.

Feminism conjures up images of man-hating women, bra-burning and unshaven armpits. So clearly I had my work cut out for me every time I told someone I was a proud feminist. But each person’s perspective and critique of my definition of what it meant to be a feminist forced me to study the topic more and – you guessed it – practice talking about it.

My journey to refine my rhetoric was three-fold:

The only thing left to do was talk to others about feminism.

People aren’t shy about sharing their opinions on the word. I was ridiculed for wearing makeup, because apparently feminists aren’t allowed to be feminine. I was accused of judging stay at home mothers, even though I was raised by one. I have been mansplained and called a femi-Nazi, even when I was trying to have a calm, civil discussion. I was verbally attacked, poked, antagonized and prodded every time I brought the topic up in conversation. In the end I emerged a more confident and articulate feminist who was ready to stand her ground.

So last June when a coworker of mine said she wasn’t a feminist because she “liked wearing dresses and heels,” I was more than ready to drop my meticulously constructed knowledge bomb on her. My speech began like so:

“Madison, feminism has nothing to do with whether you choose to adhere to arbitrary gender roles. Yes, it is important to recognize that women and young girls are conditioned to follow these roles. We are told from a young age how to look, dress, act and speak. Traditionally, this conditioning has put women in a more submissive role to men and limits their options. I believe that women should be more aware of this fact. But feminism is beautiful because it is all about the freedom of women to make their own choices without the fear of judgment. My love of makeup and dresses does not make me less of a feminist. Just like my desire to work as a respected equal among men does not make me any less of a women.”

I stood there, verbally exhausted, as I braced myself for her retort. But to my surprise and delight she simply said, “Wow, I never knew what feminism meant until right now.” This led to a longer discussion about the history of women’s rights and activism. I got to gush over feminist activists, like Gloria Steinem and I recommended books and resources for her to get even more informed.

I could have given up three years ago. I could have accepted that some people will never understand feminism and that I should keep my opinions to myself. But I took the road less traveled. I studied and practiced and I sought out people who I knew would have conflicting viewpoints. In the end I was able to change a person’s whole perspective on a topic they thought they knew.

Words can change the world. But they are useless unless you actually say them aloud and with gusto. I had the raw materials to be a talented talker, but I needed to hone my skills. By getting informed and practicing my speaking skills, I turned my gift for gab into a powerful tool.

I challenge you to become a more powerful, persuasive speaker. You may be afraid that you aren’t as articulate as your friends. You may not know your stance on certain issues. I am here to encourage you to push through. Now is not the time to shy away from you opinions. Now is time to get informed, practice and share them. You never know if they could change the world – or even just one person.