The Verbal Habitionary offers portmanteau words (a blend of words) to give us all the vocabulary to talk about – and find solutions to – our increasingly ubiquitous verbal habits that are undermining our communication, watering down our meaning, and distracting our listeners.

The first entry in the Verbal Habitionary is… 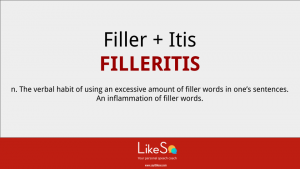 “Listening to my daughter’s friends litter their sentences with so many ‘likes,’ and ‘totallys,’ convinced me that they all must have filleritis!”

The second entry in The Verbal Habitionary is: 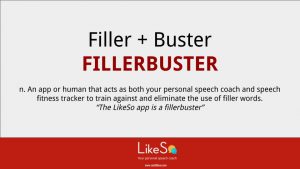 Noun. A specific app that acts as both your personal speech coach and speech fitness tracker to train against and eliminate the use of filler words.

“I have used the LikeSo app as a fillerbuster and no longer say ‘like’ three times in every sentence!”

The third entry in The Verbal Habitionary is: 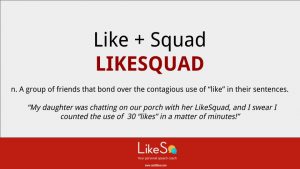 Adjective. A group of friends that bond over the contagious use of “like” in their sentences.

The fourth entry in The Verbal Habitionary is… 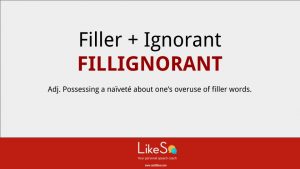 Adjective. Possessing a naivete about one’s overuse of filler words.

Use in a sentence you say?

“Although Joe was a qualified job candidate, he was fillignorant about his overuse of filler words and didn’t ace his interview or land the job.”

Not to make you self-conscious, but the fifth entry in the Verbal Habitionary is… 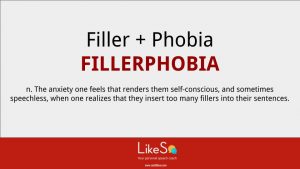 Noun: The anxiety one feels that renders them self-conscious, and sometimes speechless, when one realizes that they insert too many fillers into their sentences.

Use in a sentence you say?  How about two (one personal?)

“When the communications teacher told Stephanie to watch out for her overuse of filler words during her presentations, the fillerphobia gave Stephanie so much anxiety, she was almost unable to speak.”

“Since Audrey launched her app, LikeSo, she has unwittingly given many friends and colleagues fillerphobia as they are nervous about speaking to her with too many filler words in their sentences.”